A-1 is the second Horton ambulance purchased by the Volunteer Hose Company. It was originally designated as A-27, but was renumbered when it was assigned to the newly opened Station 1. It remained in service there until B-1 was purchased. It has kept its Station 1 identifier despite being rotated for use at station 27. 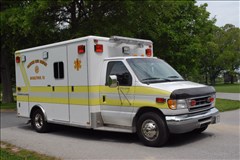